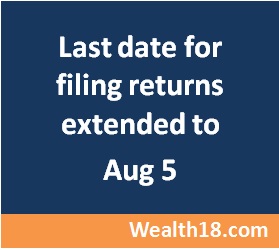 The last date for filing income-tax returns has been extended to August 5.

Tax returns for 2015-16 (assessment year 2016-17) were originally to be filed by July 31. But in view of the day-long strike at public sector banks, the deadline has been extended to August 5.

For Jammu and Kashmir, the deadline will be August 31 in view of the ongoing turmoil in the state.

This extension, it said, is given in order to avoid any inconvenience to the taxpayers while making payment of taxes pertaining to returns of income for Assessment Year 2016- 2017 by July 31, 2016 due to bank strike on July 29 and July 31 being a bank-holiday.

E-Filing of a tax return is compulsory for individuals with income above Rs 5,00,000.

Tax Haven within India – This State has no Income Tax