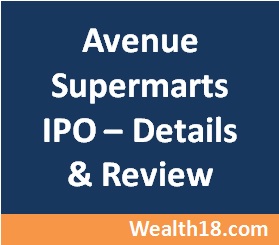 I applied for 100 shares and was allocated 50 shares. See screenshot. 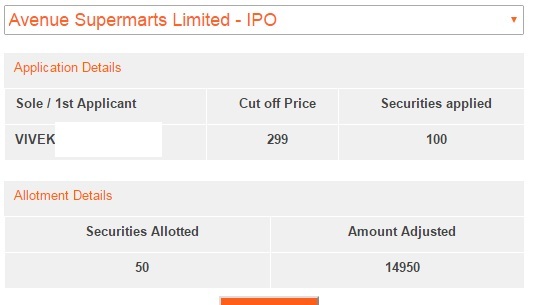 Avenue Supermarts has opened its IPO on 8th March 2017.  It is the operator company of D-Mart supermarkets.

The retail chain’s IPO is also significant on the back of its strong promoter entity, Radhakishan Damani. He is considered among the major names in the markets as a trader and value investor and this is considered to be his entry into the big league.

D-Mart, which launched its first store in 2000, has focused solely on expanding its hypermarket retail chain.

Currently, there are around 110 D-Mart hypermarket stores in 26 cities. On an average, the company has been opening 10-15 stores per annum and hopes to continue or accelerate it depending on the market.

As of August 31, 2016, the company had 4,225 full-time employees and also higher number of employees on contract.

The company has raised Rs 561 crore by allotting 1.87 crore shares to 35 anchor investors at the upper price band of Rs 299 apiece.

D-Mart’s better financial performance in comparison to its peers has been driven by its differentiated business model, wherein 90% of D-Mart stores are located in properties owned by the firm, unlike most retail firms which are burdened by the high cost of rentals.

While there are no direct comparable, companies like V-Mart (40 times P/E on FY17E), TrentBSE (49 times) and Future Retail (34 times) having significant retail presence are trading at higher valuations.

Should you consider investing:

The performance of the company is better than its listed big peers. Continous growth in Revenue & net Profit growth. Also the promoter (Rakesh Damani) is one of the reputed investor.

Investors can consider subscribing for this IPO for medium to long term.