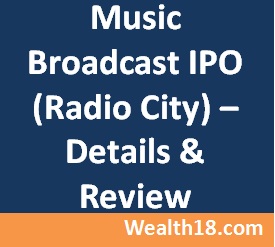 The Shares are expected to be listed on Friday. You can check the allotment status for Music Broadcast IPO (Radio City IPO) at the link below:

Music Broadcast, the operator of FM channel Radio City has kicked off its Rs 500 crore IPO on Monday 6th March 2017.

Proceeds from the IPO will be used to clear debt. Post issue, Jagran Prakashan’s stake in Music Broadcast will be reduced to 71% from 89%.

Music Broadcast is the first and oldest private FM radio broadcaster in India. The company started broadcasting from four cities in 2001 and has grown its presence to 37 cities as on 15 February.

The company operates radio stations under the name Radio City across the country.

Positive aspects of the company are its higher advertising rates, healthy operating margins and strong listenership base.

Promoters :  89.4% is owned by Jagaran Prakashan

The company has raised Rs 146.56 crore from anchor investors.  The broadcaster sold 44.01 lakh shares to 15 anchor investors on Friday. These investors included HSBC, Nomura, Franklin India, Morgan Stanley, DSP Blackrock and Reliance Mutual Fund, among others. The anchor portion, which is 30% of the issue size, was allotted at Rs 333 apiece.

For the six months ended September 30, the company generated operating revenues of Rs 136.8 crore and Ebitda of Rs 45.5 crore.

Valuation as compared to its peers:  Attractively Priced

Should you consider investing:   Yes

The valuation looks attractive as compared to its listed peer (ENIL). So on that basis, you can consider to invest for long term.