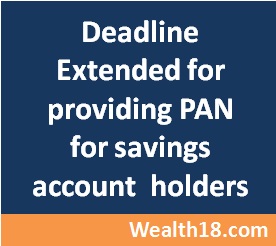 If you have not yet provided PAN or Form No. 60 for your bank account, do so at the earliest to avoid unnecessary hassles later.

Background for this rule

Post-demonetization, several changes were made to track black money and the know-your-customer (KYC) norms were made stringent. In a circular dated 15 December 2016, the RBI put restrictions on some of the banking transactions where PAN or Form No. 60 was not available. In the circular, the RBI stated that, “No debit transaction, transfer or otherwise shall be allowed in accounts which do not comply with the KYC norms.”

To begin with, these rules were made applicable to accounts where both the thresholds were reached: balance of Rs5 lakh or more; and the total deposits (including credits by electronic or other means) made after 9 November 2016, exceeded Rs2 lakh.

Taking it further, now CBDT has amended the tax rules, and provided a deadline of 28 February to update PAN or Forms No. 60 in all the savings accounts, which are held with a bank or a post office.

The ‘Basic Savings Bank Deposit Accounts’ (BSBDA) are excluded from this rule. BSBDA are small bank account and they are subjected to various limitations. For instance: total credits in such accounts should not exceed Rs1 lakh in a year, the maximum balance in the account should not exceed Rs50,000 at any time and the total withdrawals (cash or transfers) should not exceed Rs10,000 in a month.

Form 60 – Form No. 60 is a self-declaration form, where a person declares that he does not have a PAN card. Thsi form can be downloaded from bank’s website or from branches. A person furnishing the Form No. 60 needs to mention details such as: address along with a valid address proof, status of income tax assessment, and reason for not having a PAN. After this declaration, the account holder can do transactions in cash, such as depositing or withdrawing money from the account. It is better to apply for PAN for unnecessary hassles.