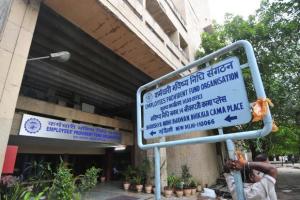 August 2014,  EPFO has asked its over 120 field formations to inspect firms which are deducting PF on 50 %  or less of total wages. In a bid to deal with issue of splitting of wages by employers, field offices told to inspect establishments that may be structuring salaries in such a way as to cut PF liabilities

The employers often split wages into different allowances to reduce their PF liability and also increase the take home pay of their workers. The provident
fund is deducted as 12 % of basic wages.

According to the order, the exercise of inspecting the firms deducting PF on 50 %  or less of total wages, must be completed by August 31.
The EPFO headquarters have asked the field formations to submit a report in this regard by September 7.

It observed in the order that “many employers split total wages payable to their employees into several allowances in such a way that the said allowances are covered under the category of exclusions provided under Section 2 (b) (EPF & MP Act 1952)….encouraging subterfuge of splitting of wages to exclude the PF  liability.”

As per Section 2 (b) of Employees’ Provident Fund & Miscellaneous Provisions Act 1952, the basic wages for the purpose of PF deduction includes all
emoluments which are earned by an employees while on duty. However, the clause provides that basic wages excludes the cash value of food concession, dearness allowance, house rent allowance, overtime allowance, bonus, commission or any other similar allowance payable and any presents given by  employer to employees.

Earlier in November 2012, EPFO has issued a notification for clubbing of wages, saying “All such allowances which are ordinarily, necessarily and uniformly paid to the employees are to be treated as the basic wages”.  but that was put in abeyance later on.

However, a review committee, constituted to look into the nitty-gritty of clubbing of allowances with basic pay for PF deductions, had supported the idea
for enhancing the social security benefit under the schemes run by the EPFO.

PF authorities said the circular won’t have an impact on organized sector employees who earn more than the minimum mandatory PF threshold. PF deduction is mandatory for organized sector workers whose salary is Rs.6,500 per month. This threshold has been increased to Rs.15,000 but this has not been notified yet.

However, experts said that it is difficult to justify the 24% deduction from a low-paid employee’s salary for provident fund savings. Lowly paid workers want more salary at hand and clubbing several allowances to calculate PF will only reduce their take-home salary.