Ujjivan Financial Services IPO Details & Review – Should you invest in it ? 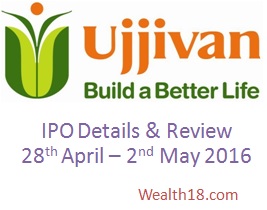 Ujjivan Financial Services is a microfinance company with small finance bank license, and is ready to hit the market with its initial public offering (IPO) on 28th April 2016.

Ujjivan Financial Services, which will become the second micro-lender to go public, has already received in-principle approval to set up a small finance bank.

The public issue of Ujjivan Financial Services, comprises fresh issuance of shares worth Rs 358.16 crore and an offer for sale of up to 24,968,332 shares by the existing shareholders. Three foreign investors – Mauritius Unitus Corporation (2.49 per cent), WCP Holdings III (3.06 per cent) and Women’s World Banking Capital Partners (5.34 per cent) – will be completely exiting the company through the IPO.

“Out of the Rs 885-crore IPO, the company will garner Rs 358 crore in fresh capital and the balance is a secondary transaction through an OFS by the existing foreign shareholders who will be exiting their investment.

Objective of the issue: The proceeds from issue of new shares will be used to augment the capital base. Among the key reasons for their IPOs is to reduce foreign shareholding to the Reserve Bank’s mandate of not exceeding 49 per cent for an SFB. This means that as with Equitas, foreign investors will not be participating in Ujjivan’s IPO.

Ujjivan has a market share of 11.2%. The microfinance industry is likely to grow at 30% from FY15 to FY18, and given Ujjivan’s strong presence, its microfinance business will continue to grow at a fast pace. Its assets under management have grown at 51% CAGR from FY11 to FY15.

The IPO is attractively priced at 1.66 times, post IPO price-to-book. Equitas had priced its IPO at 1.8 times and witnessed strong listing gains of over 30%.

At the upper end of the price band at Rs 210, the issue is priced at P/B of 1.6 times post issue BV and appears to be attractive compared with listed players such as Equitas Holdings (2.44 times), SKS Microfinance (6.2 times 9MFY16) and Cholamandalam Investment and Finance (3.17 times 9MFY16). 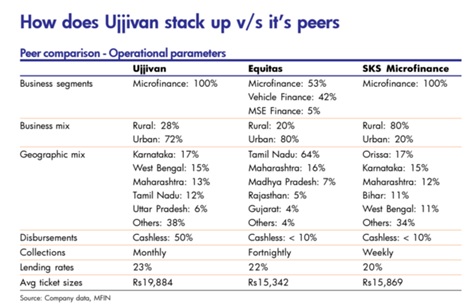