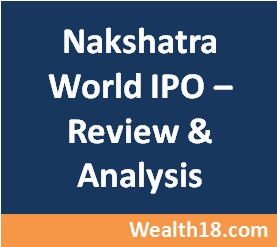 Nakshatra World Limited is an established pan-India player in the organized jewellery market, with a focus on manufacture and distribution of branded studded jewellery, gold jewellery and other jewellery products in India and overseas, under the brands Nakshatra, Gili, Asmi, Sangini, Diya, Parineeta and Rivaaz.

As of September 30, 2016, its distribution network spread across 290 cities and towns in India, with more than 1,644 POS, through its distributors, 329 SIS and 61 stores, which includes 49 franchisee operated stores and 12 stores  which are  owned and operated by the company. It also has  890 overseas POS located across China, Singapore, Thailand, Malaysia, Indonesia, United Arab Emirates, Saudi Arabia and Qatar.

In  terms  of  its geographic spread across India, it has a strong presence in the eastern and western parts of India, with 39% of its POS being located in the eastern region (comprising cities and towns such as Kolkata, Patna, Ranchi, Cuttack, Guwahati,  Gaya  and  Siliguri) while  35%  of  its  POS are located  in  the western region (comprising  cities  and towns such as Mumbai, Aurangabad, Nagpur, Jaipur, Bikaner and Solapur).

The company has eight manufacturing units, two located in Mumbai, one in Jaipur, one in Surat and four in Hyderabad. The company has an in-house design team with a total design bank of 12,868 active stock keeping units (“SKUs”), of which approximately 4,000 new designs are churned every year. It provides quality certificates, issued by independent valuers, on all its jewellery.

The company acquired the brands ‘Gili’, ‘Nakshatra’, ‘Asmi’, ‘Sangini’, and ‘Parineeta’ in 2011, and ‘Diya’ in 2016. It is promoted by Mr. Mehul Choksi and GGL. GGL, the flagship company of the Gitanjali group, is a leading integrated jewellery manufacturing and retailing player that was established in 1986.

The company proposes to utilize the funds which are being raised towards funding the following objects:

In addition to the above, the company expects to receive the benefits of listing of its Equity Shares on the Stock Exchanges, including enhancing its brand name and creation of a public market for its Equity Shares in India.

Brokerage Recommendations: It will be updated once the IPO is announced.

Should you invest:   The analysis will be completed once the price band is declared.