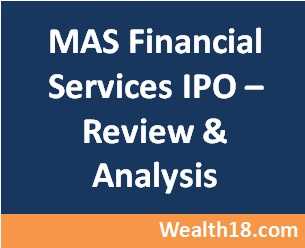 MAS Financial Services,  Gujarat based NBFC is coming with its IPO soon.

As of September 30, 2016 the company had more than 530,000 active loan accounts, across more than 3,200 Customer Locations in six States and the NCT of Delhi, served through its 119 branches.

In addition to its sales team, the company has entered into commercial arrangements with a large number of sourcing intermediaries, including commission based DSAs and revenue sharing arrangements with various dealers and distributors where part of loan default is guaranteed by such sourcing partners. As of September 30, 2016, it had 344 such sourcing intermediaries for its two-wheeler loan segment, 350 for its Commercial Vehicle loan segment, 32 for its housing loan segment, who typically are affordable housing project developers and property agents. A significant part of its business origination in various segments is represented by loans extended to MFIs, HFCs and other NBFCs that provide financing products including micro-enterprise loans, SME loans, Commercial Vehicle loans, two-wheeler loans and housing loans, enabling the company to have a geographical reach extending beyond its direct customer locations. As of September 30, 2016, Rs. 14,790.25 million, which represented 50.52% of its Asset Under Management (AUM) related to loans extended to other financial institutions.

The company proposes to utilise the Net Proceeds from the Fresh Issue towards augmenting its capital base to meet future capital requirements.

In addition, the company expects to receive the benefits of listing of its Equity Shares on the Stock Exchanges, including enhancing its brand name and creation of a public market for its Equity Shares in India.

Brokerage Recommendations: It will be updated once the IPO is announced.

Should you invest:   The analysis will be completed once the price band is declared.