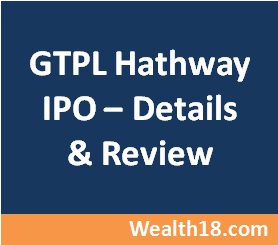 The company accounted for 14% share of the total cable carriage and placement fee market in India in Fiscal 2016. As of September 30, 2016, its digital cable television services reached 169 towns across India, including towns in Gujarat, West Bengal, Maharashtra, Bihar, Assam, Jharkhand, Madhya Pradesh, Telangana, Rajasthan and Andhra Pradesh. As of September 30, 2016, it had seeded approximately 6.19 million Set-Top Boxes (STBs) and had approximately 5.41 million active digital cable subscribers. As of August 31, 2016 it had approximately 2.02 million analog cable subscribers, for which it has received requisitions for digital STBs from Local Cable Operators (LCOs).

The Issue comprises of a Fresh Issue by the company and an Offer for Sale by the selling shareholders.

Should you invest:  The market is quite competitive with big competitors. You should consider AVOIDING this IPO as the company is not in new OTT/ DTH business which is the future.