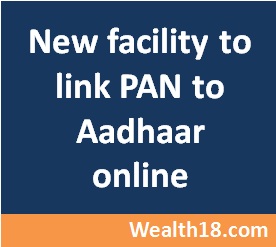 There is no need to login or be registered on E-filing website. This facility can be used by anyone to link their Aadhaar with PAN.

Taxpayers can go to www.incometaxindiaefiling.gov.in and click on the link on the left pane-> Link Aadhaar,  provide PAN, Aadhaar no. and ENTER NAME EXACTLY AS GIVEN IN AADHAAR CARD (avoid spelling mistakes) and submit. After verification from UIDAI, the linking will be confirmed. 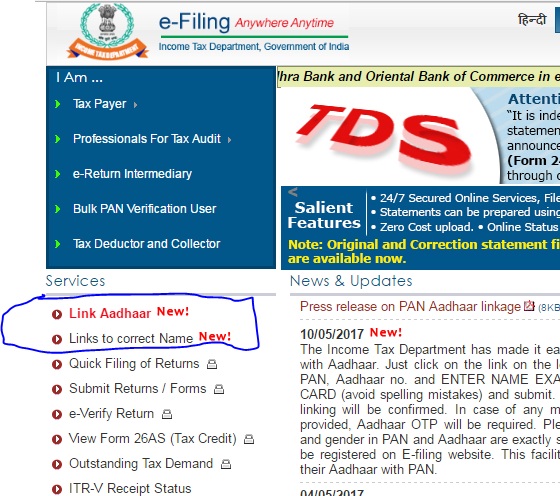 In case of any minor mismatch in Aadhaar name provided by taxpayer when compared to the actual data in Aadhaar, One Time Password (Aadhaar OTP) will be sent to the mobile registered with Aadhaar.

Taxpayers should ensure that the date of birth and gender in PAN and Aadhaar are exactly same.

In a rare case where Aadhaar name is completely different from name in PAN, then the linking will fail and taxpayer will be prompted to change the name in either Aadhaar or in PAN database.

This facility is also available after login on the e-filing website under Profile settings and choose Aadhaar linking. The details as per PAN will be pre-populated. Enter Aadhaar no. and ENTER NAME EXACTLY AS GIVEN IN AADHAAR CARD (avoid spelling mistakes) and submit. Read my post – How to link PAN with Aadhar after login into efiling website

Taxpayers are requested to use the simplified process to complete the linking of Aadhaar with PAN immediately. This will be useful for E-Verification of Income Tax returns using OTP sent to their mobile registered with Aadhaar.

The government, under the Finance Act 2017, has made it mandatory for taxpayers to quote Aadhaar or enrollment ID of Aadhaar application form for filing of income tax returns (ITR).Also, Aadhaar has been made mandatory for applying for permanent account number with effect from July 1, 2017.