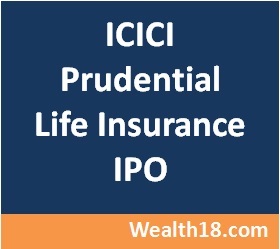 Many members who applied for full amount, they have received an allotment of 251 shares.

ICICI Prudential Life Insurance IPO is opening on 19th Sep. This is the first Insurance company IPO and the the biggest IPO in 6 years after Coal India.

Among the 23 private sector life insurance companies in India, the company had a market share on a retail weighted received premium basis

The company has a diversified multi-channel distribution and sales network. As of March 31, 2016, it had 121,016 individual agents and it’s bank partners had over 4,500 branches.

The company’s claims settlement ratio for retail death claims of 96.2% % was higher than most private sector life insurance companies, as compared to the private sector average of 89.4%.

The size of the Indian life insurance sector (excluding Sahara Life Insurance Company Limited) was Rs 3.7 trillion on a total premium basis in fiscal 2016, making it the 10th  largest life insurance market in the world and the 5th largest in Asia.

The total premium in the Indian life insurance sector grew at a CAGR of approximately 17% between fiscal 2001 and fiscal 2016. Despite this, India continues to be an underpenetrated insurance market with a life insurance penetration of 2.7% in fiscal 2015, as compared to 3.7% in Thailand, 7.3% in South Korea and a global average of 3.5% in 2015.

In 2015, Government of India increased the maximum permissible shareholding of foreign investors from 26% of paid-up equity capital to 49%. This led to an inflow in foreign investments of US$1.13 billion in fiscal 2016, an approximate increase of 170% over fiscal 2015.

According to CRISIL Research, Life insurance industry report, July 2016, the new business premium for Indian life insurance companies is expected to grow at a CAGR of 11-13% over the next five years. Improving economic growth, low insurance penetration, increased financial savings, and a low sum assured to GDP ratio are expected be the key catalysts for this growth.

Promoters holdings:  At the end of March 2016

ICICI Prudential Life Insurance is a joint venture between ICICI Bank Limited, India’s largest private sector bank in terms of total assets with an asset base of Rs 7.2 trillion at March 31, 2016, and Prudential Corporation Holdings Limited (PCHL), a part of the Prudential Group, an international financial services group with GBP 509 billion of assets under management at December 31, 2015.

ICICI Bank and PCHL have been identified as promoters in previous filings with IRDAI. Further, ICICI Prudential Life Insurance is an “Indian owned and controlled” company under the Insurance Act and applicable regulations. ICICI Bank currently holds 969,157,662 Equity Shares and PCHL holds 370,784,884 Equity Shares, equivalent to 67.62% and 25.87% of the pre-Offer issued, subscribed and paid-up Equity Share capital of Company, respectively.

The company will not receive any proceeds from the Offer.

At March 31, 2016, the company had Rs 1 lakh crores of assets under management, making it one of the largest fund managers in India. Of these, 72.4% were in linked assets. Funds representing 92.9% of its linked assets with identified benchmarks at March 31, 2016 had performed better than their respective benchmarks since inception. The company’s expense ratio of 14.6% for fiscal 2016 was also one of the lowest among the private sector life insurance companies in India.

Anchor Investors: Ahead of its mega IPO worth up to Rs 6,057 crore, ICICI Prudential Life Insurance is believed to have allotted shares worth Rs 1,635 crore to a clutch of marquee investors from India and abroad, including Singapore Government, Nomura and a pension trust for Boeing employees.

In June 2016, HDFC Life and Max Life announced that they will enter into an agreement to evaluate a potential combination through a merger of Max Life and Max Financial Services Limited into HDFC Life.

There are no listed life insurance companies in India. MFS, which is a holding company for Max Life Insurance, is the only listed company in this sector. However, MFS underwent a restructuring during the fiscal 2016 and hence comparative financial information corresponding to the latest fiscal year for MFS is unavailable as of date.

Should you invest:
Many Brokerage has recomended to apply for this IPO. ICICI Pru IPO is priced reasonable as compared to recent HDFC MX merger deal.