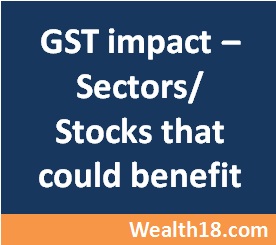 GST will replace multiple indirect taxes and will improve taxation efficiency. Most of the goods are placed under four rates of GST – 5%, 12%, 18% and 28%.  Read another post on GST rates for various items in India

List of stocks that could get benefit from GST

Hindustan Lever :  HUL is expected to gain market share with the implementation of GST as business shifts from unorganised to organised segment. HUL will benefit from moving to a moderately lower 18 percent tax slab and its major raw materials- consumer staples falling in the lowest tax labs (0-5 percent).

Dabur India:  Major segments of Dabur soaps and hair oil falls under lower tax slab of 18 percent compared to the current effective rate of 26-28 percent. The largest segment honey continues to fall under the exempt category.

Colgate Pamolive India: Colgate pays an effective tax of 25-26 percent and so 18 percent tax on toothpaste (80 percent of sales) is a positive, particularly as it levels the playing field against two players Dabur and Patanjali who enjoys tax benefits

Britannia Industries: Most of the FMCG products have been subsumed in the nearest slab of existing indirect tax. However, for toothpaste, hair oil & soaps, it would come down from current 23 percent to 18 percent. Dairy milk products will also be at lower end of tax implication. ICICI Securities maintain a buy rating on Britannia with a target price of Rs4270 to be achieved in the next 3 months and a stop loss of Rs3315.

Godrej Industries: The management expects in FY18, implementation of GST would provide strong momentum for a much better economic environment and stronger consumer demand.

Ashok Leyland: the hub and spoke model of transport of goods is likely to gain with the implementation of the GST regime and it will boost the sales of vehicles, driven by requirements in the logistics sector.

Prabhat Dairy: Foodgrains, milk and other articles of daily use have been exempted from taxation under the GST regime, which would give a good boost up to the company.

Kajaria Ceramics: The GST rate for ceramic tiles has been fixed at 28 percent, which would largely be a neutral rate for Kajaria as the current incidence of the indirect tax is between 26.5 percent & 29 percent. on a positive note, GST will benefit the sector as it would provide a level playing field for organised players (unorganised players have a 50 percent share in tiles market) and bring in consolidation in the sector. ICICI Securities maintains a hold rating on Kajaria and see a modest upside towards Rs725 in the next 12 months post Q4 results.

Relaxo footwear: The GST implementation (likely to be from July 1, 2017) will be a key growth lever for Relaxo, as a large part of the Indian footwear market is unorganised (60 percent). The GST rollout will reduce the pricing difference between branded and non-branded players in the near future. Shrekhan maintains a buy rating on Relaxo Footwear with a target price of Rs525.

FMCG –  Market experts believe GST in the FMCG sector is positive for companies like Nestle, Marico, Dabur and Colgate. Overall, the food side of the FMCG business is likely to benefit from the GST. One should also keep an eye of stock like Heritage Foods.

Consumer Durables and Capital Goods : All capital goods and all industrial intermediaries would attract 18 per cent tax instead of 28 per cent. On the other hand, a few segments in the consumer durables would see higher effective taxes and need to take price hikes to offset cost pressures from increased taxes. The GST Council has put items like refrigerators and ACs in the maximum 28 per cent category.
Stocks to watch: Voltas, Havells and CG Consumer may benefit fundamentally as GST will bring more companies under the organised ambit and reduce the unfair competition from unorganised players.

Power sector will gain as thermal coal rate is no 5% vs 11.7% earlier – Positive