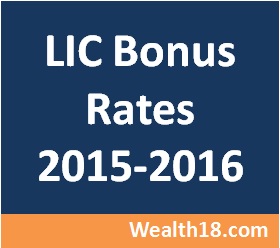 Reversionary Bonus is declared per thousand of the Sum Assured Amount in each financial year by LIC. It will be be paid at the end of maturity period or on the death of the policyholder, whichever is earlier.

Final Additional Bonus (FAB) is an additional bonus which is paid in participating policies, in addition to the simple reversionary bonus.

Final Additional Bonus is paid only once in the policies resulting into claim by maturity or discounted claim (Surrender of policies with one year preceding the date of maturity) or death claim, during the period 01/01/2016 and ending 9 months from the date of next valuation (ie 31/12/2016)  at the rate declared by LIC. Final additional bonus depends upon the sum assured in policy and term of the policy. This bonus is paid provided the policy is in force for full sum assured till the date of maturity or discounted claim or date of death.

All the plans of LIC in which Final additional Bonus (FAB) is payable are divided into 5 major group according to their eligibility for FAB.

Final Additional Bonus (FAB) are only available for policies which are participating in profit. It is totally depend on surplus made by LIC of India. Mostly the policies having more than 15 years of policy term are eligible for FAB. Quantum of Final additional bonus also depend upon the sum assured in policy, higher the sum assured more the FAB.