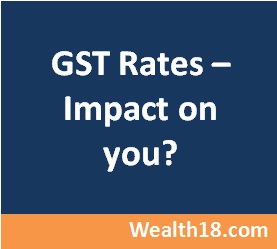 GST Council has fixed four-tier GST structure in Nov 2016 and it is expected to be rolled out from April 2017.

GST 0% Tax –  Some essential items including food grains, which presently constitute roughly half of the consumer inflation basket, will be taxed at zero rate.

GST 28% Tax –  Most white goods, like washing machines, air conditioners, will be taxed at 28 percent (with riders).

GST 28% Tax + Cess – Luxury cars, tobacco, pan masala and aerated drinks would also be levied with an additional cess on top of the highest tax rate.  With cess, the overall tax will be between 40 %  and 65 %

6) There has been no consensus yet on tax rate for gold.