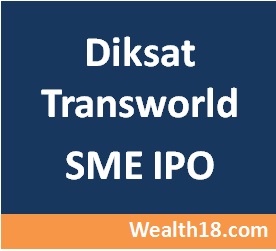 Diksat Transworld has announced its IPO has opened on 29-Sep.

Diksat Transworld Limited is engaged in the business of Media and Entertainment through the mediums of Television, Newspapers and Movies. Headquartered in Southern India they are established television broadcaster and newspaper circulation in India. The company owns and operates four satellite channels, including

The company is also involved in the production of movies under GR8 Talkies name. They have recently released their first Tamil movie named Gugan. Its customers include program producers, advertising agencies, and newspaper agents/subscriptions. They maintains a content library, which has a collection of various movies, programs and music, primarily in Tamil language.

The company has set-up its distribution network for Win TV such that it is available locally, nationally and internationally. For this, the company has entered into an agreement with Tata Communications Limited for satellite up-link and also it has entered into an agreement with Reliance Big TV Limited for downlink and broadcast of its channel on its DTH platform.

Objective of the issue: The company will not receive any proceeds from the Offer.

You can see more details in the IPO Prospectus – https://www.bseindia.com/downloads/ipo/2016621163517DRHP_DIKSAT.pdf

As the company revenue & profits are flat over last few years, the issue is not so attractive.