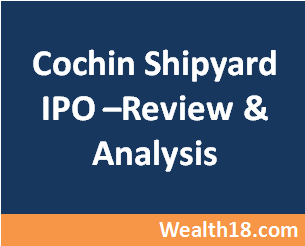 Cochin Shipyard Limited, the largest public sector shipyard in India is coming with its IPO soon.

Cochin Shipyard Limited, commenced its operations in 1975 and is the largest public sector shipyard in India in terms of dock capacity. It caters to clients engaged in the defence sector in India and in the commercial sector worldwide. In addition to shipbuilding and ship repair, it also offers marine engineering training.

The company is in the process of constructing a new dock, a ‘stepped’ dry dock. This stepped dock will enable longer vessels to fill the length of the dock and wider, shorter vessels and rigs to be built or repaired at the wider part. The company is also in the process of setting up an International Ship Repair facility, which includes setting up a shiplift and transfer system.

Its Marine Engineering Training Institute at Kochi began in 1993, where it conduct marine engineering training programs that are approved by Director General of Shipping (DGS), GoI. It also operates a material testing laboratory, which was established in 1972. Its material testing laboratory is accredited by the National Accreditation Board for Testing and Calibration Laboratories (NABL) and is one of the leading laboratories in Kerala in the field of chemical, mechanical and non-destructive testing of various materials including metals, welds and alloys.

Cochin Shipyard Limited has several certifications including the ISO 9001:2008, ISO 14001:2004 and OHSAS 18001:2007. Its listed debentures have been rated AA+ since 2014 by various agencies including India Ratings and Research Private Limited (IRRPL) and CARE. It was also adjudged the “Shipbuilding Company of the Year” in 2015 by the Gateway Awards.

The government would sell 33,984,000 shares worth Rs 489 crore worth through an offer for sale (OFS). The remaining amount will be raised by issuing 22,656,000 fresh shares.  The company proposes to utilize the funds which are being raised towards funding the following objects:

In addition to the above, the company expects to receive the benefits of listing of its Equity Shares on the Stock Exchanges, including enhancing its brand name and creation of a public market for its Equity Shares in India.

The company has three listed peers — ABG Shipyard, Bharati Defence and Infrastructure (Bharati Shipyard) and Reliance Defence and Engineering (RDEL). None of these stocks have done well in the last one year. But Cochin Shipyard is a profit-making firm.

Should you invest:   You can consider for listing gains

Cochin Shipyard derives 74% of its revenue from the shipbuilding whereas the rest 26% comes from the ship repairs. Client-wise, defence sector contributes 85% to the topline while the rest 15% comes from commercial segment. The company delivered strong revenue, earnings before interest, taxes, depreciation, and amortization (Ebitda) and net profit growth of 14%, 106% and 112% respectively in FY15-17.