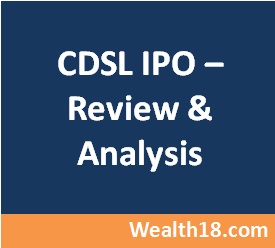 You can also send your PAN by comment below and we can check the status for you. As the retail quote was oversubscribed, you may get less or no allotment.

Central Depository Services Ltd (CDSL), one of the two depository services providers in India, is offering its shares to public for subscription through an initial public offer (IPO), which opened on June 19, 2017.

CDSL was promoted by BSE in 1999. Subsequently, BSE diverted part of its stake to leading Indian banks. CDSL facilitates holding of securities in electronic form and enables security transactions, off market transfer and pledge through book entry. It also offers other online services such as e-voting, e-locker etc. As of April 30, 2017, CDSL had 589 Depository Participants (DP) and 12.4 million investor accounts. CDSL has a market share of 43 per cent in cumulative demat accounts.

CDSL has a diversified source of revenue with 35 per cent coming from annual issuer charges(recurring in nature), 21 per cent from transactions(which is correlated to market and is volatile in nature) and 13 per cent from online data charges.

CDSL IPO is purely an offer for sale and the company does not intend to raise any fresh capital through this issue. Through this IPO, its existing promoter Bombay Stock Exchange (BSE) is selling 3.52 crore shares to public due to which its stake in CDSL will reduce to 24 per cent from 50.1 per cent currently. The objective of the IPO is also to get the benefits of listing.

At the upper end of the price band, CDSL shares are valued at 18.2 times its FY17 earnings per share, which is a reasonable valuation. While many brokers are suggesting to subscribe to this IPO, you should note that the net profit for last year has declined.