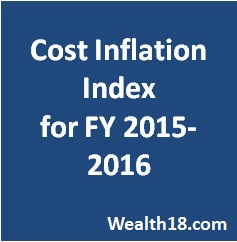 For details on Cost inflation Index for other years (1981 to 2015) , please click on this link

S.O.  (E) –  In exercise of the powers conferred by clause(v) of the Explanation to section 48 of the Income-tax Act, 1961 (43 of 1961), the Central Government hereby makes the following further amendments in the notification of the Government of India in the Ministry of Finance (Department of Revenue), Central Board of Direct Taxes, published in the Gazette of India, Extraordinary vide number S.O. 709(E), dated the 20th  August 1998 namely : –

2. In the said notification in the Table after serial number 34 and the entries relating thereto the following serial number and entries shall be inserted, namely : –

Gaurav Kanaujia
Director to the Government of India