HomeStocksTrent shares up on announcing JV with Tesco
Stocks

Trent shares up on announcing JV with Tesco 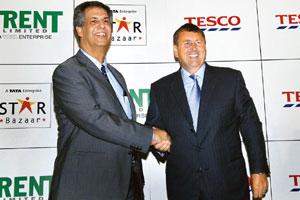 UK Supermarket –  Tesco said that following receipt of approval from the Indian Foreign Investment Promotion Board, it has entered into a deal with Trent Limited to form 50:50 joint venture with  the operator of the Star Bazaar retail business, Trent Hypermarket Limited (THL).

The world’s third-largest retailer, which since 2008 has had a franchise agreement to provide support to Star Bazaar, had made the application to India’s FIPB in December.

On completion of the transaction THL will operate 12 stores retailing a range of merchandise including food and grocery, personal and home care products, home and kitchen, fashion and accessories.

The stores are operated under the ‘Star Bazaar’ and ‘Star Daily’ banners, and spread across the southern and western regions of India.