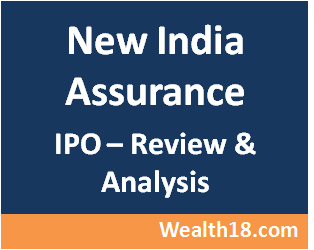 Industry Overview:  India is amongst the top 15 general insurance markets in the world and one of the fastest growing markets.

Among the comparable Asian counterparts also, India’s general insurance penetration pales; the corresponding numbers for China, Thailand, Singapore and Malaysia were at 1.8%, 1.7%, 1.7%, and 1.6% respectively as of 2016. This suggests the enormous untapped potential of the Indian general insurance market.

The company has increased market share in terms of gross direct premium from 14.7% in Fiscal 2012 to 15.0% in Fiscal 2017 despite of increased competition from private players.

Anchor Investors:  One day before the issue.

Should you invest:  Although the company is the market leader in the general insurance, the valuation seems quite high.

I will personally avoid this IPO primarily because of high valuation.