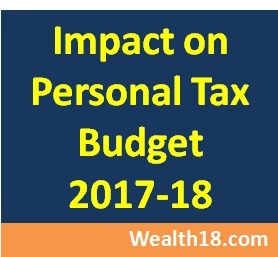 1. Tax Slab changes The rate of income tax is proposed to be reduced to 5% (from 10%) for income between INR 2.5 to INR 5 lakhs. This is likely to bring tax saving of at least INR 12,875 for all taxpayers with an income exceeding INR 5 lakhs. Other tax slab and rates remain unchanged.

2. Surcharge A surcharge of 10% on tax payable is proposed for individuals having an income of INR 50 lakhs to INR 1 crore.

3. Tax rebate The rebate for the low income earners (under section 87A) is proposed to be reduced to INR 2,500 from the present limit of INR 5,000 and will be available only in case of income up to INR 3.5 lakhs (earlier, INR 5 lakhs). This is to avoid double exemption.

5. Exemption on withdrawal from National Pension Scheme (NPS) In case of partial withdrawal from the NPS, it has been proposed to exempt withdrawal up to 25% of the contribution made by the individual.

7. Tax on certain long-term equity share or units Equity shares in a company or a unit of an equity-oriented fund acquired on or after 1 October, 2004, on which STT has not been paid on purchase, is proposed to be taxed as long-term capital gains. Presently, the capital gains arising on transfer of above assets is exempt from tax, if the sale transaction suffers STT.

10. Restriction on cash donations The maximum limit of cash donations deductible under section 80G has been proposed to be reduced to INR 2,000 from INR 10,000.

11. Exemption from capital gains taxation on reinvestment in specified bonds Section 54 EC allows for an exemption from long-term capital gains in respect of investments made in certain specified bonds i.e., NHAI or RECL. It is now proposed to extend the exemption in respect of investments to be made in certain other bonds to be notified by the central government.

13. Filing of return A simplified tax return form (one page) is proposed to be introduced for individuals having taxable income (other than business income) up to INR 5 lakhs.

15. Time period for revising a tax return is being reduced to 12 months from completion of financial year, at par with the time period for filing of return. Also the time for completion of scrutiny assessments is being compressed further from 21 months to 18 months for Assessment Year 2018-19 and further to 12 months for Assessment Year 2019-20 and thereafter

16.No transaction above Rs 3 lakh would be permitted in cash subject to certain exceptions