HomeNewsCheque books and passbooks for seven banks are invalid
News 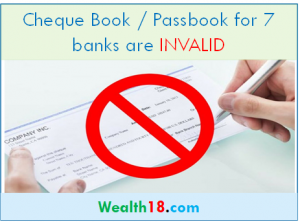 Do you know that the cheque books and passbooks of several banks that have been merged will become invalid.

PNB and Bank of Baroda had already informed that the existing cheque books of OBC, United Bank of India, Vijaya Bank, and Dena Bank will get discontinued from April 1, as they are valid only till March 31, 2021.

Although Punjab National Bank (PNB) has extended the deadline from April 1 to June 30 2021, other banks like Union Bank of India, Canara Bank, Indian Bank and Bank of Baroda are yet to come out with any official notice on this.

Banks have asked their customers to get new cheque book and IFSC code.

Note that the cheque books, passbooks, IFSC codes of these banks will have to be changed by a deadline fixed by the bank.

PM CARES Fund – Full Details and How to Donate